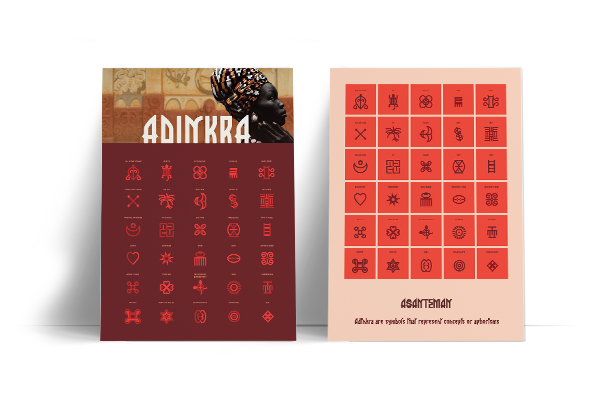 The Adinkra symbols come from West Africa, specifically a region that is modern-day Ghana and Cote d’Ivoire. The symbols belonged to the Asante (or Ashanti) peoples, who would print them on cloth, as well as pottery and metalwork. The Asante people resisted British colonial rule when it arrived in West Africa. It may be for this reason that much cultural tradition and symbolism survives to this day.
The word ‘adinkra’ means ‘farewell’ or ‘goodbye’ in the Twi language, spoken by the Asante people. For this reason, Adinkra cloth was worn often on special occasions, particularly funeralsI
The Adinkra symbols are closely tied to the history, beliefs and traditions of the Asante people. Each symbol represents a small number of simple concepts, meaning that Adinkra cloth would traditionally be printed using bespoke patterns, telling a story about the wearer that could be read by those knowledgeable enough to understand the underlying symbolism.

The Adinkra symbols, and their meanings, have survived to the present day. Cloth displaying Adinkra symbols is now mass-produced in bright colours, using modern techniques and is very popular both in Africa and the wider world. This is not to say that the traditional weaving and printing methods have died out. It is still possible to find Adinkra cloth that has been made by hand, printed using natural inks and traditional techniques.
Today, the University of Ghana uses Adinkra iconography in its official logo and crest. Many other modern institutions in West Africa borrow these symbols for use in branding, due to their prevalence, history and associated meanings.