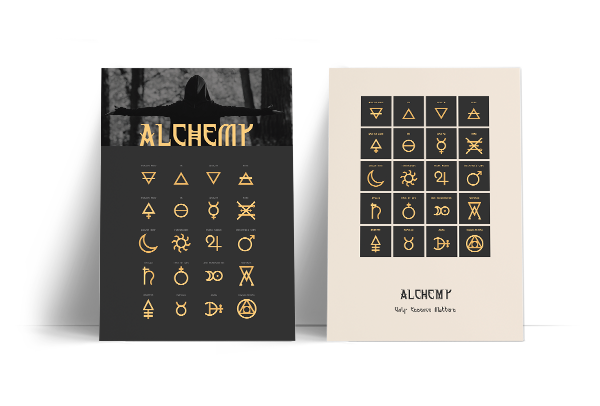 Alchemy, which gained significant popularity in Medieval Europe, is the precursor to modern-day chemistry, philosophy and scientific method.
Alchemists performed experiments, attempting to turn base metals, such as lead, into gold. They sought to develop an elixir that would grant immortality or eternal life, as well as a cure-all medicinal panacea. Famously, alchemists attempted to create a ‘philosopher’s stone’ in order to achieve these aims.
Though the symbols in this category relate to European alchemic practices, similar experiments and projects existed in the Indian subcontinent, the Far East, and the Islamic world.

Alchemists developed theories and method, as well as laboratory techniques, that would later develop into modern scientific practice. However, they continued, at the same time, to place importance upon ancient elemental notions, as well as magic, esotericism, and mythology.
For a time, alchemists were persecuted across much of Europe. This led to the adoption of cryptic symbolism, disguising alchemical work. Some were borrowed from astronomical symbols, creation associations between cosmic and elemental concepts.
Alchemy and the pursuit of transmutation persisted well into the 18th century, when the development of modern science and empiricism largely put an end to the practice.