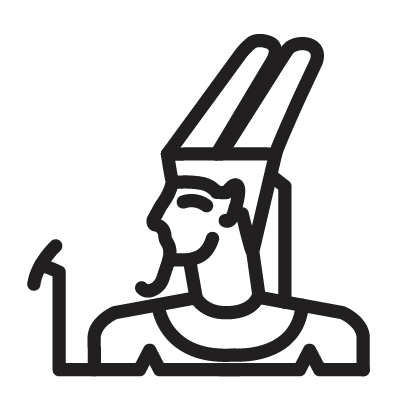 Amun (“hidden”), in Egyptian mythology, is the sun god. The sacred animal of Amun is the ram and the goose (both are symbols of wisdom). Amun was depicted as a man (sometimes with a ram’s head), with a scepter and in a crown, with two high feathers and a sun disk. The cult of Amun originated in Thebes and then spread throughout Egypt. Amun’s wife, the sky goddess Mut, and his son, the moon god Khonsu, were with him the Theban triad. Later, Amun acquired the status of the beloved and especially revered god of the pharaohs, and during the Eighteenth Dynasty of the ancient Egyptian rulers he was declared the head of the Egyptian gods. Amun-Ra granted victories to the Pharaoh and was considered his father. Amun is the creator god of everything, the lord of the world, all gods, people and objects exist in him invisibly, the ruling Pharaoh is the son of Amun from his marriage with the queen-mother.