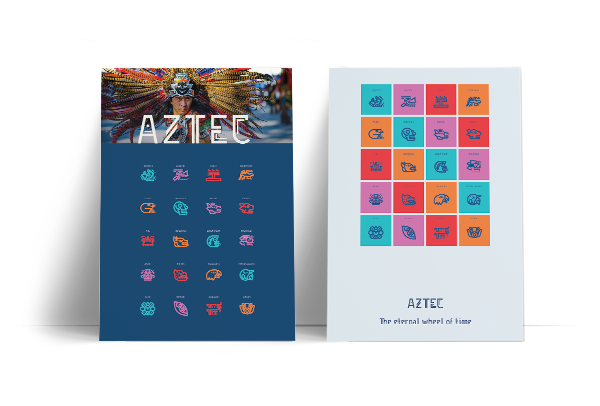 The Aztecs were a Mesoamerican culture that existed in modern-day Mexico from the 14th to 16th centuries. The Aztec Empire, a confederation of three large city-states, was formed around the 15th Century. The Aztecs were comprised of several ethnic groups from the region. Most, but not all, were speakers of the Nahuatl language.
Much of what we now consider to be Aztec in terms of culture, truly relates more broadly to the whole central Mexican region of that time. Aztec culture involved agriculture, with the primary crop being maize. Societies were unequal, with an upper and peasant class. Religion included a pantheon of gods, each of which was responsible and tied to the changing seasons and days set out in the Aztec calendar.
The Aztec Empire reached its zenith just as first Spaniards arrived in Central America, in 1519, led by Hernán Cortés. The conquistadors defeated the emperor Cuauhtemoc and founded Mexico City on the ruins of the Aztec city of Tenochtitlan. The conquest radiated outwards from there, until the Spanish had incorporated all of Mesoamerica into the Spanish Empire.

Much of what we know about the Aztec culture comes from the contemporary writings of the Spanish conquerors. More, still, comes from indigenous Nahuatl writing (created post-conquest) and excavated archaeological evidence found at religious sites.
At its height, Aztec culture had rich and complex mythological and religious traditions, as well as achieving remarkable architectural and artistic accomplishments.
Aztec life was organized around two calendars: one calendar of 260 days organised religious rituals and the other, a solar calendar of 365 days, tracked the seasons for agricultural purposes. Each had a name and number in both calendars, as well as an associated god who governed the day. Every 52 years, the two calendars aligned a great celebration was held to mark the event.