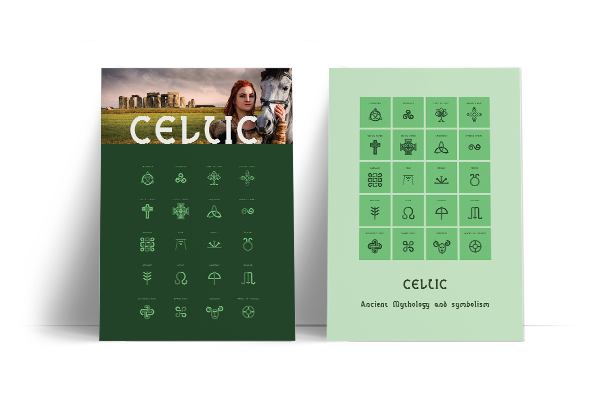 The Celts were an Indo-European tribe that, at one time, covered large parts of northern and western Europe. The Celts existed from the Iron Age, as is evidenced by archaeological finds, and are found, still in Northern Europe, discussed in texts dating from time of Julius Caesar and the Roman Empire.
The Celts lived in small, rural societies. Dependent upon the seasons, good weather, and the fertility of crops and animals, they deified natural phenomena such as sun, rain, thunder, and lightning. Celtic symbolism reflects this preoccupation with the natural world. Deities and religious symbols are represented reflecting elements of the landscape, or the elemental forces that governed the lives of small Celtic farming communities.

Despite the fact that Celts in Europe long predate the Roman Empire, the bulk of Celtic art and symbols date from this later period. This is because the majority of Celts had little need for recurrent iconography, and had no system of writing prior to Roman times. This is not to say that there was absolutely no Celtic symbolism before this period. In fact, some archaeological finds suggest the opposite, that some Celtic societies did produce art and iconography, but that this has not survived for us to study. In the modern day, many Celtic symbols can still be found Ireland, Scotland, Wales, and the north of France.
They are used in religious iconography, logo design and are popular in the world of tattooing. They connate a sense of belonging in terms of place and history, especially in Scotland and Ireland, that transcends historical truth and genealogy or ancestry, but speaks instead to a shared cultural mythology.