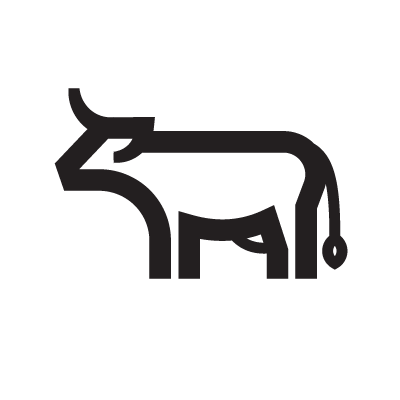 Because of its milk that is a staple food for many human beings, the cow is arguably one of the most useful animals in the world. It was one of the first animals domesticated by humans, and its symbolic importance is rich. It is emblematic of fertility, abundance, wealth, the universal Mother, and of rebirth. The cow is also a gentle and compliant creature.
It is not surprising that the cow is universally thought of as a mother figure. In Egypt the cow was personified as Ahet, the mother of the Sun itself. To make themselves fertile Egyptian women wore amulets of the Goddess Hathor, with the head of a cow, in her guise as Creatrix. In Europe, too, the cow was the mother-ancestor of all living things, called Audumla, the milch-cow. In Greek myth, one of the names for the Great Cow was Europa, which means “full Moon.” The stars were said to be the children of Europa.
Curiously, the cow was also considered a psychopomp, a creature able to conduct the souls of the dead to the Underworld. The psychopomp aspect of the cow is still celebrated in the Nepali festival called the Gai Jatra or cow festival. In a boisterous celebration, every family that has lost a member during the course of the year has to take part in a procession, leading a cow, or, if no animal is available, then a child dressed in a cow costume is considered to be a fair substitute. The cow is believed to guide the soul on its final journey, including a voyage through the Milky Way, the constellations of stars said to be the milk splashed by the Great Cow that was the Mother of the Universe.
The cow as a sacred animal is a fundamental part of Hindu iconography. In India the cow is so revered, and treated so gently, that it often causes a traffic hazard as it ambles along busy city roads. There are several reasons for the sacred status given to the creature. Not only does the Hindu faith have respect for all animals (vegetarianism is a tenet of the faith), but the God Krishna was a cowherd for a time, and one of his names is Bala Gopala, “the child who protects the cows.” Hindu deities rule over each and every part of the cow. During times of famine, the cow is far more useful as a creature that can produce limitless amounts of milk, than as a dead beast that would provide meat for a limited period only.