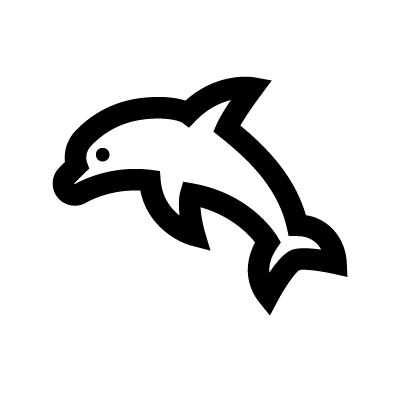 The dolphin has become ubiquitous as a symbol of the so-called New Age, due in part to its benevolently smiling appearance, its intelligence, its ability to communicate verbally with others of its kind, and the fact that it’s a mammal that is comfortable in an environment normally reserved for fishes.
The name comes from the Greek delphinos, meaning “womb.” The name of the Delphic Oracle where the priestesses gave their prophecies holds the same root; the temple was dedicated to Apollo, who arrived at Delphi in the shape of a dolphin.
For thousands of years the dolphin has been considered a helpful friend to humankind. It also acts as a psychopomp or guide to the other world. This is a fitting role for the dolphin given its ability to exist in a dimension alien to humans and because it has been seen to save those who might otherwise have drowned. The dolphin is symbolic of metamorphosis. There is a Greek legend about some pirates who, after capturing Dionysus and tying him up, fell overboard and turned into dolphins.
In its role as the saver of souls, the dolphin is compared to Christ and also to the Roman Sun God Mithras, whose worship was superseded by that of the new God of Christianity.