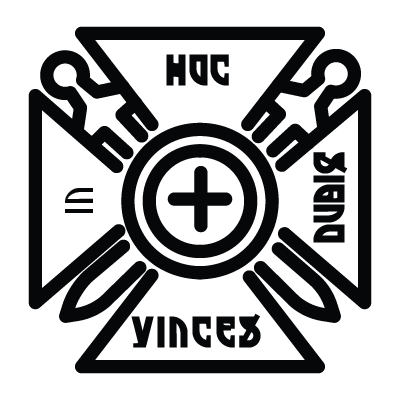 Description of In Hoc Signo Vinces

In Hoc Signo Vinces is one of the main symbols of the modern Knights Templar. Today the Templars are “an international charitable order of knighthood associated with Freemasonry.” Mainly in the United States, the Knights Templar are the last order to join the York Rite. Unlike other Masonic organizations, which only require belief in a Supreme Being regardless of religion, membership in the Knights Templar is open only to Christian Masons who have completed their Royal Arch and, in some jurisdictions, their mysterious degrees.
In Hoc Signo Vinces is one of the most detailed Templar symbols. Above is a knight’s helmet. The crowned cross is at the top of the Maltese cross, with swords crossed behind it. Included is the motto In Hoc Signo Vinces, a Latin rendition of the Greek phrase meaning “in this you will conquer.”