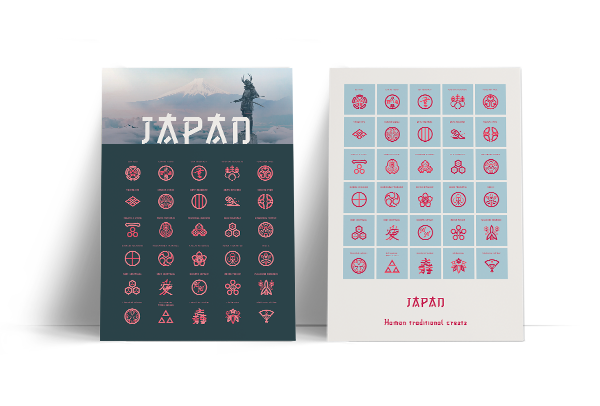 The Japanese family crests, or Mons have a similar role as the English family crests. These are coat of arms used to represent families and individuals, and more recently, businesses and institutions. There is little known about the origin of these crests, but it is commonly believed that the tradition started as a fabric pattern to identify aristocratic families and individuals. It eventually evolved to being used in battles, and then became a common way of identification, even for commoners. In terms of design, there were no hard and fast rules. There seemed to be a general consensus to use a roundel that would encircle some sort of figure. This could be a plant, a man-made shape, a natural or celestial figure as one part of it. Other mon used religious symbols, kanji and other shapes in their design as well. The mon was also designed to be monochromatic, and colors were generally eschewed.

For commoners however, the use of the mon was tricky. If they had none, they would either adapt the mon of their patron or organization, or failing that, used what would be considered inappropriate mons, or developed their own altogether. The usage and choice of mons came with their own rules and were largely dictated by social customs – and its usage was monitored and enforced. For example, it was considered inappropriate to use a mon already in use by someone else, and especially offensive if held by someone of a higher rank. If a situation such as that occurred, the lower-ranking person would have to change their mon in order to avoid any offense or wrongdoing. Mons held by the ruling Japanese clans were legally protected and could not be used by others.