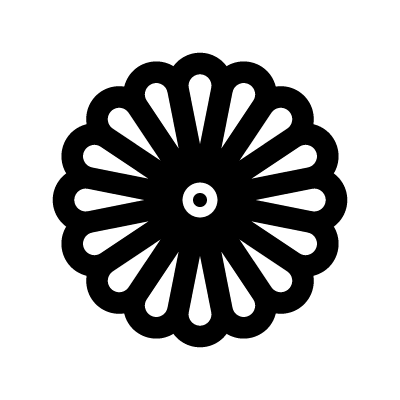 The chrysanthemum flower, or the Jirogiku is the national emblem or crest of Japan. It is associated with the royal family and the imperial household. It represents longevity, as well as health and restoration. The chrysanthemum is also seen as a symbol of rejuvenation. First introduced during the Nara dynasty in 710, the royal family took a liking to the simple flower and retained it as their own symbol. As the imperial symbol of Japan, it is always depicted with 16 petals. It is also a reference to the head of state. The Jirogiku is also seen as a symbol of the Throne of the Emperor of Japan. During the Meiji period, no one was allowed to use the chrysanthemum as their seal aside from the emperor of Japan. This led to other family members of the Royal Family creating their own slight variations of it, which is why a 14-petaled version can also be seen sometimes on certain objects.