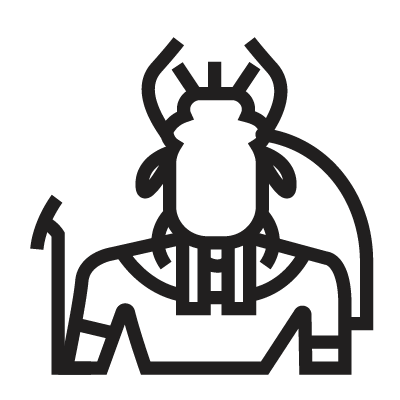 Khepri Egyptian God (or Kheper), in Egyptian mythology, is the god of the rising sun, demiurge and creator of the world. The ancient deity of the sun Khepri was depicted as a huge scarab rolling the sun across the heavens (correlation of manure and the sun as a guarantee of fertility). From time immemorial, the scarab was the personification and symbol of Khepri, one of the most ancient Egyptian gods associated with the innermost mysteries of the Sun. The image of the Khepri-scarab, conveying the ideas of transformation, renewal and resurrection, is ubiquitous in ancient Egyptian religious and funerary art. Khepri was depicted mainly as a scarab beetle, although in some tombs and burial papyri he is depicted as a man with a scarab body in place of a head, or as a scarab with a human head on the shell of a beetle.