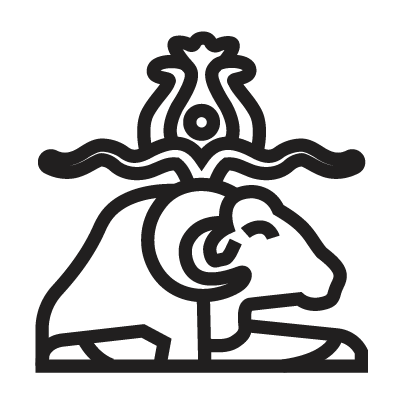 God Khnum was depicted as a man with a ram’s head. He was considered the ruler of the territory of Upper Egypt, which was adjacent to the first threshold of the Nile. The island of Elephantine was located at the first threshold, and there, on the southern tip of the island, there was a temple dedicated to this god. Khnum was revered as the god of fertility, a demiurge, who blinded people, gods and their Ka (doubles) on a potter’s wheel from clay.
In the old version of the myth about the creation of the world from primordial chaos, the god Khnum with the head of a ram and his wife Heket with the head of a frog were proclaimed “the first gods who were at the beginning, who built people and made gods.” The primordial creative nature of Khnum and the creative principle inherent in it began to be explained on the basis of the etymology of the root “khonen” – “to create like a potter.” So the ram-headed Khnum became the “god-potter” who once created “all creatures, from gods to animals, on his potter’s wheel and who still defines the appearance of every newborn child, clearly creating them, or at least their “double” in heaven before the birth of the child. ”