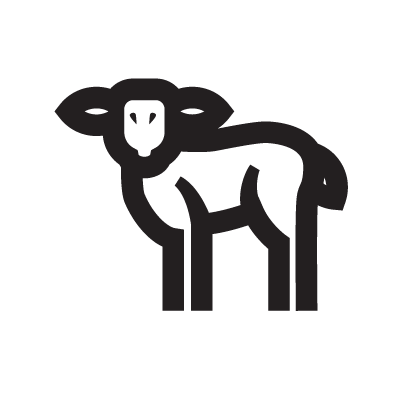 It might seem odd that the adult version of the lamb—the sheep—carries quite negative symbolism, as a creature that blindly runs with the flock, unable to think as an individual.
However, the lamb is a much more positive symbol. It stands for innocence and purity, the spiritual, the compliant, and gentleness. Further, the lamb is a symbol of spring, of new hope, and of triumph over adversity. The first lamb of the season, as the most potent personification of these qualities, was usually sacrificed to the Gods.
The sacrificial nature of the lamb carries resonance through the Christian, Jewish, and Muslim faiths. Hence, the symbolism of the Christ as the Lamb of God, sacrificed for all mankind but resurrected by a beneficent God. There is a specific symbol, the Paschal Lamb, which perfectly embodies this notion; the lamb appears with a halo and a banner, symbolizing both sanctity and victory.
The lamb is also a symbol of peace, and where it appears with the dove, this aspect is compounded. Sometimes the lamb and the lion appear together, a universal symbol of concord and harmony and the balancing of opposites.