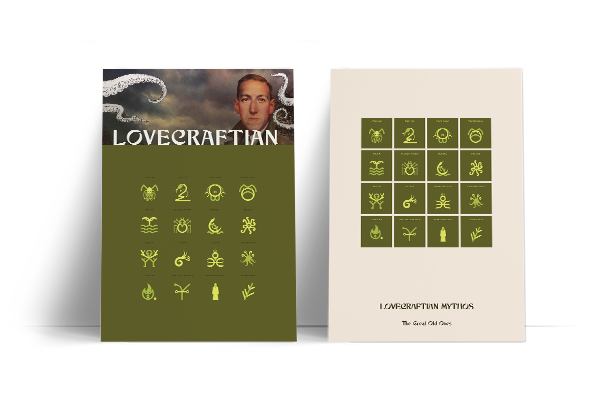 Lovecraftian symbols are steeped in literature and horror. The brainchild of famed 1920s author, HP Lovecraft, these symbols depicted different gods, creatures, and other flights of fantasies created by Lovecraft in his rich literary world. A cult figure, Lovecraft took a different approach to science fiction and horror. For Lovecraft, fear was not just about what was on earth, but beyond that. He coined the idea of cosmic horror, a concept that stated that the universe and its working were beyond any sort of human comprehension. Instead, humanity itself was seen as insignificant. Born in Providence, Rhode Island, Lovecraft used New England as a backdrop to his tales. Influenced by World War I, Lovecraft’s story centered on a central theme: the horrors man inflicts on others. His stories were known to be dark, chilling, and filled with evils from another world.

Lovecraft crafted stories of powerful entities, supernatural and extraterrestrial that held immense power. These creatures used their powers in subtle ways over humans and led the latter into madness. The most enduring of Lovecraft’s creations is that of Cthulhu Mythos and the Necronomicon. These were tales of larger than life entities that led humans to be invalid, and grimoires of magical rites and forbidden works. Unappreciated in his time, Lovecraft died with relatively little or fame. However, over time, his works have garnered more attention and fame. Within weird and mystical horror and science fiction, he is seen as a cult figure of sorts for fans of this niche literary genre. The Lovecraftian Mythos are based on deities created by him, using the original descriptions as the source material. Each symbol represents a specific creature Lovecraft created and inspired, using his own words to create a visual representation of the rich mythological worlds created by him.