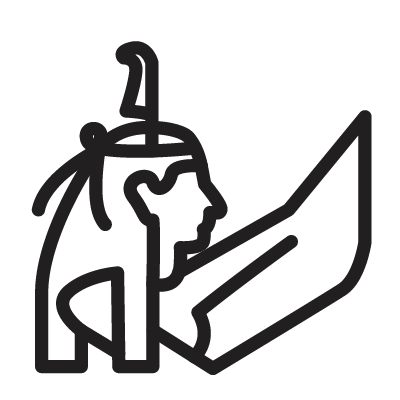 Maat (“ostrich feather”), in Egyptian mythology, the goddess of truth, justice and harmony, the daughter of the sun god Ra, a participant in the creation of the world.
She played a prominent role in the afterlife judgment of Osiris. The center of the Maat cult was in the Theban necropolis. Since the ancient Egyptians believed that each deceased had to appear before 42 judges and plead innocent or guilty of sins, the soul of the deceased was weighed on the scales, balanced by the ostrich feather of the goddess Maat. Libra was held by Anubis and the verdict was pronounced by the husband of Maat, the god Thoth. If the heart was burdened with crimes, the monster Amtu, a lion with the head of a crocodile, devoured the deceased.
If the deceased lived his life “with Maat in his heart”, was pure and sinless, then he revived for a happy life in the fields of paradise. Maat was usually depicted with a feather in her hair, which she placed on the scales at the trial. It was believed that people live “thanks to Maat, in Maat and for Maat.”