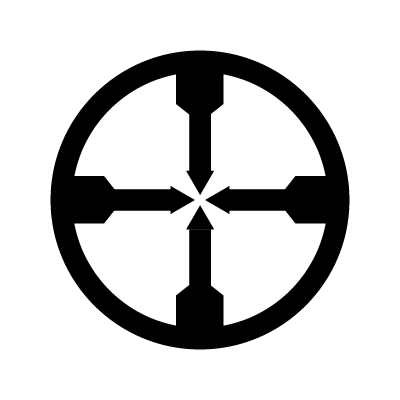 In Medicine Arrows symbol, each of the arrows points inwards, representing one of the cardinal compass points, and also wisdom (North), innocence (South), far sight (East), and introspection (West). The arrows are enclosed within a medicine wheel. Joined in the middle of the wheel, the center point represents enlightenment.

The Lakota Sioux are a Native American tribe, one of the three Sioux tribes of the Plains. Their traditional lands were in modern-day North and South Dakota. The Sioux people are thought to have originated in lower Mississippi the Ohio river valley. They moved, over time, to the upper Mississippi region and then conflict with other tribes forced them further north towards Iowa and then to the Great Plains. In the Plains, the Sioux were introduced to horseback riding, and became expert hunters of the white buffalo. When explorers and settles from Europe began to appear in North America, the Lakota Sioux were initially antagonistic. They saw settlers as encroaching on their lands and competition for resources. Eventually, the settlers negotiated a treaty which acknowledged the Sioux to be sovereign over the lands of the great plains in exchange for European safe passage along the Oregon Trail. A gold rush in the Black Hills – considered sacred by many Native American tribes – caused tensions to flair again. It was during this period that the famous Battle of Little Bighorn was fought, and General Custer’s troops defeated by Chief Crazy horse. Unfortunately, this victory lead to a US military crackdown on Sioux tribes, who driven onto small reservations and restricted from hunting buffalo. Not long after, famous Sioux chieftain Sitting Bull was killed at Standing Rock. The Lakota believe all things contain a spirit; including animals, plants, rocks, and rivers. Much of the Lakota Sioux mythology centres around these spirits, as well as mythological creatures and shamanic practice. Lakota Sioux symbols reflect this engagement with the natural and spiritual worlds, as well as commitment to respect, rather than dominate, the natural world. In the modern day, the Lakota Sioux live mainly in reservations. Significant controversies have arisen over the years due to their treatment by successive US governments. In 1980, the Supreme Court awarded $122 million to Sioux tribes as compensation for mistreatment over land claims in the Black Hills. The Sioux rejected the Supreme Court payment as it would legally negate their claims to return to their ancestral lands.