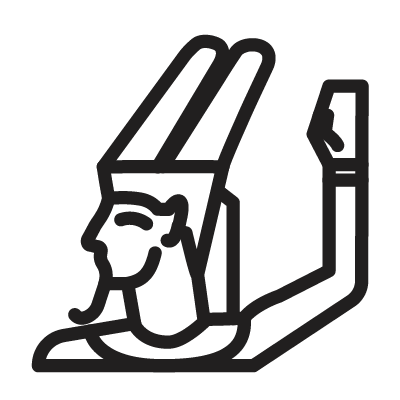 Min in Egyptian mythology is the god of rain, fertility, producer of crops, male potency, master of all women. Min – an ithyphallic deity, is depicted with a vertically erect penis, the head of which is open, as if preparing for copulation with the universe through his hand. Min was portrayed as a bearded man with closed legs and a headdress (the same as Amon’s). Min’s right hand is turned up, a whip in the shape of the Orion constellation is embedded in it, the left hand is usually not depicted on Egyptian frescoes, but on statues it clasps the phallus at the base, completely pulling the flesh from the head of the penis, which as a result looks like a cut off. Around the forehead it is usually tied and a red ribbon descends vertically from the back, which almost reaches the very ground. Min was the patron saint of human and livestock reproduction. It was believed that it was he who endows men with sexual strength, the power to give birth to a son. The sacred animal of Min was the white bull, which was also the image of abundant seed and fertility. Another symbol was the long lettuce, which in Egypt was considered an aphrodisiac and which men ate in the hope of making themselves more masculine.