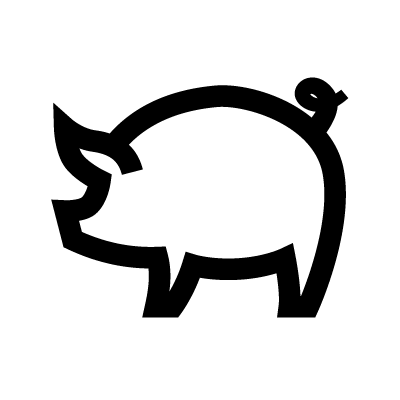 Calling someone a pig is a pejorative term, implying that the person is dirty, greedy, and generally uncouth.
The pig is regarded as ignorant, gluttonous, and selfish, an animal that wallows in its own filth (notwithstanding the fact that the animal is actually extremely clean and scrupulous), one of the animals considered “unclean” by both Hebrews and Muslims and which is forbidden as food to followers of these faiths. To throw “pearls before swine” is to offer something to someone who is unable to appreciate it.
In Tibetan Buddhism, the pig represents worldly desire in all its forms—lust, material possessions, food. It sits at the center of the Wheel of Dharma as a symbol of things that tie us to the cycle of materialism, holding us back from spiritual enlightenment.
However, there’s another side to the coin. All animals that were considered holy or sacred were also forbidden to be eaten, and the pig, too, despite its negative connotations, held sacred status, linked to the Mother Goddess in lots of different faith systems. The sow is a prolific mother, giving birth to many piglets. The fecundity of this creature means that she is associated with Demeter/Ceres, the Earth Goddess and mother of the harvest. To Hindus, as Varahi, she is the boar-faced Goddess who protects holy buildings. Durga, also, takes on the form of the pig as Vajrabarahi. The Egyptian Goddess of the Night, Nut, was depicted on amulets as a sow being suckled by her piglets. The Celtic Mother Goddess, Ceridwen, was called the Old White Sow, and both the deity and the pig were associated with the Moon. Only the Gods were considered worthy to eat the meat of the pig.
In China, the pig is one of the auspicious animal signs of the Chinese Zodiac, where it symbolizes hard work, love of family, and a caring nature. However, it seems that pigs might fly before they manage to shake off some of their more unfortunate associations.