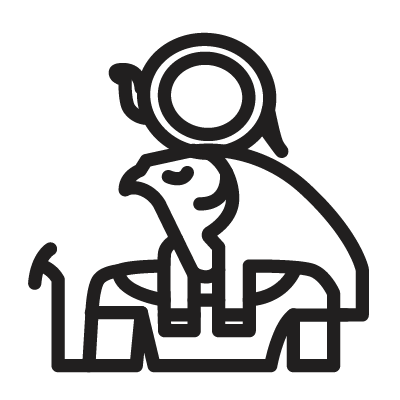 Ra Egyptian God was the main solar deity of ancient Egypt. The sun god is the source of light, energy and life. He is the creator of the cosmos and its laws. The solar cult is closely related to such concepts as health, children, courage, and the fate of the country. The name Ra (Re) is the Egyptian word for the sun, the most visible of the divine forces that created and sustained the existence of the world.
It was the god Ra who established the cycles of the Egyptian year, the time and the flood of the Nile itself, thus ensuring the very possibility of successful agricultural production in the valley of the great river.
The journey of a deity across the sky has many mythological variations. The Sun-Ra could fly across the sky on its wings. Therefore, the solar disk with wings is one of the most widespread and most important symbols of Ancient Egypt.
This is also why he is often depicted as a man with the head of a falcon or a hawk, that is, in the guise of powerful birds that can soar high in the sky.
Another equally popular option was the movement of the deity across the sky in a boat. In this case, the sky was understood as the curved giant goddess Nut (the sky), on whose body Ra floats.