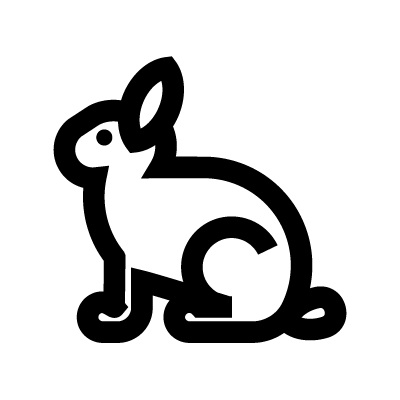 Incredibly fecund, the rabbit is a symbol not only of fertility, but also of sexuality and lust, personified by the “bunny girl.” “Bun” is an old English word and refers to the distinctive circular shape of the animal’s tail. Although the rabbit didn’t make its appearance in the British Isles until the twelfth century, its prolific breeding habits meant that it was soon prevalent everywhere and it adopted a little of the same symbolic meaning as the hare, minus the mystery accorded the hare as the more elusive nocturnal creature.
Because of its fecundity and gregarious nature, the rabbit is a symbol of love and peace for some Native Americans. There is a courtship ritual called the Rabbit Dance.
The rabbit’s foot is still seen by some as a particularly potent good-luck charm. While having its foot severed is presumably not very lucky for the rabbit itself, as a totem object the foot is believed to bless its owner with the same fertility and swift-footedness as the animal. The efficacy of the piece of rabbit worn as a charm did not escape the Lakota warriors, who believed that an armband of its skin would enable them to run as fast as the rabbit itself.