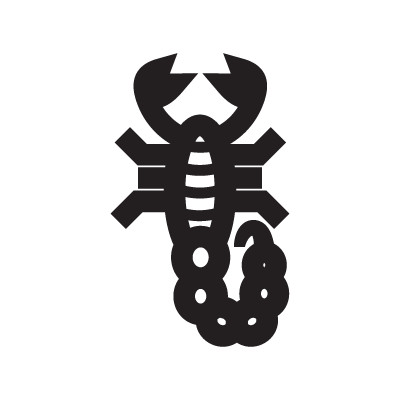 Because the scorpion is so dangerous—it has enough venom to kill a man—in the countries where it lives its name is often not mentioned in case the scorpion is somehow “invoked.” Instead it is referred to euphemistically. Whenever this happens we know that an animal is particularly potent.
The scorpion is constantly prepared to attack, the sting in its tail always unsheathed. As such, the insect is the embodiment of brute aggression. This aggression is further promulgated by the fact that the female scorpion will only ever give birth once; her progeny have the grisly habit of destroying their mother by digging their way out of her belly.
The scorpion was a hieroglyph in Ancient Egypt and was sacred to the Goddess Selket, who had either the body of a scorpion and the head of a woman, or (more usually) the body of a woman with a scorpion sitting on her head. The power of this Goddess resided in her ability to wield the power of the scorpion against her enemies; however, she could also use this power as protection from scorpions, too. Selket also had power over snakes and other poisonous reptiles, protecting pregnant women in particular.