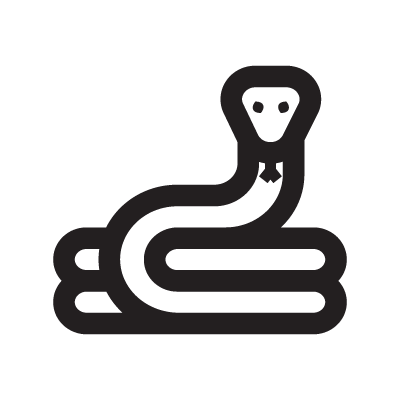 Lying on its belly close to the earth, limbless, hairless, and coldblooded, the serpent represents the opposite end of the scale to the loftier spiritual heights to which Man aspires. The snake, or serpent, is arguably one of the most prominent animal symbols, and carries with it diverse and contradictory meanings.
Some of those contradictory messages include the serpent as a symbol of evil but also of healing powers; of cunning and also of wisdom; as a life form that is so base that it must be capable of reaching the greatest of spiritual heights. The serpent is considered, unsurprisingly, to be a phallic symbol, yet is also one of the oldest emblems of female power, seen, for example, held in the hands of the priestesses on Knossos as a symbol of their wisdom and power. This image brings to mind the latter-day snake handlers of certain charismatic churches in the United States, who believe that so long as they have faith then the snake will not bite them.
The dichotomy of the serpent symbol is embodied in the story of Adam and Eve. Demonized as an evil influence (the Devil himself) that persuades Eve to offer the forbidden fruit of knowledge to Adam, this fruit nevertheless contains knowledge and in eating it, the pair open their eyes to a wider world. As a phallic symbol, the snake also makes Adam and Eve aware of their own sexuality, and the first thing they do after this realization is to cover their genitalia with fig leaves. The serpent is a symbol of regeneration, reincarnation, and of healing powers.
Evidence of the god-like status of the snake to the Native Americans, too, is evident in structures such as the 4000-year-old Serpent Mound in Ohio. To Native Americans the snake was a dangerous creature, which deserved respect at the same time as suspicion. In fact, such was the reputation of the snake for telling lies and weaving deceit that the forked tongue of the creature was adopted as a description fitted to untrustworthy people, namely, the white man.