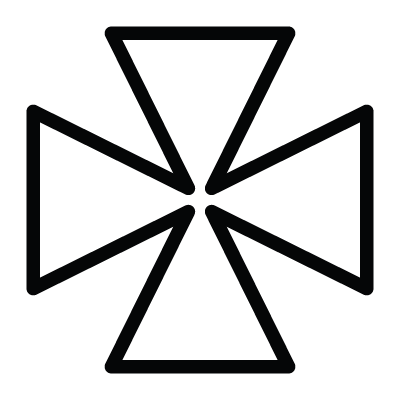 Templar Cross is a straight equilateral cross with flared ends. Among other associations, it was used in the Middle Ages by the Knights Templars. According to legend, when the persecution of the Templars began in France and throughout Europe, only a “miracle” suspended their execution in one of the German lands. At the cathedral, to test the guilt of the accused, their cloaks were thrown into the fire, but the Templar cross on none of them was on fire.
Judging by the records of the medieval chronicler Matthew of Paris, by the 13th century the cross of St. George was established among the English crusaders; among the French – silver or white; among Italians – a yellow or azure cross; among the Germans – black, among the Flemings – green, among the Spaniards – purple, among the Scots – a silver St. Andrew’s cross. It is believed that only the templars had the right to use this symbol, since it was a legend associated with the Jerusalem Temple and the Temple of the Holy Sepulcher, and the Templars appeared in Jerusalem.