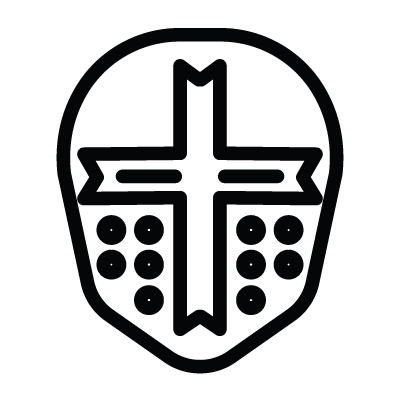 The Templar helmet, as we are used to imagine it today, is the Great Helm or tophelm – a helmet for cavalry combat, which appeared around the end of the 12th century during the Crusades. It consisted of a crown, assembled from several plates, a front plate and a back plate. The design of the helmet provided protection for the head in front, from the sides and behind, the view was carried out through narrow (9-12 mm wide) viewing slots, and at short distances it was somewhat limited. Below the slits for the eyes were ventilation holes. Sometimes they made their way in orderly, forming whole patterns or images. The highest hierarchs of the Templars could punch patterns from the traditional crosses for them. On the late 14th century tophelm variety, the Kübelhelm, the vents were usually located only on the right side of the helmet, so as not to weaken the metal on the left side, which is most susceptible to enemy spears. The helmet of the Knights Templar was no different from the helmets of other knights of that period, except for the decoration with a large black cross associated with the order and small crosses around the perimeter (it might not have been).