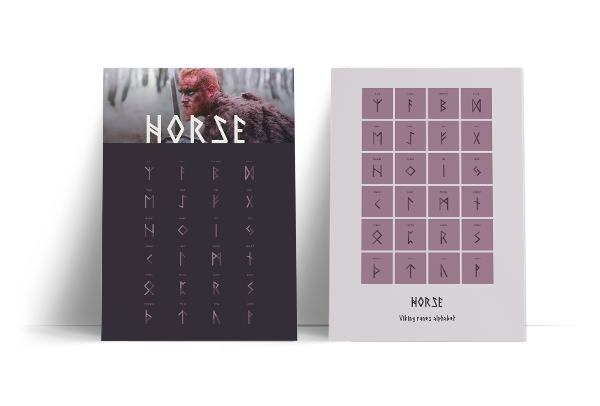 Derived by Nordic and Germanic tribes, runes were woven into Norse religion and magic. Each rune is more than a sound or a letter, but a representation of a cosmological principle or power. In Norse mythology, each rune served as a means to invoke the force it stands for. Though it has its roots in Norse myth as a discovery by Odin, the runes were developed in the first century AD. This ancient writing system was used mainly in northern, western and central Europe.
The runic alphabet is called the ‘futhark’ and is divided into two types: younger and elder Futhark. The elder Futhark consists of 24 characters and was used from approximately 100 to 800 AD. The younger Futhark consists of 16 characters and was used between 800 to 1100 AD approximately. However, in remote parts of Sweden such as Älvdale, runes lived on as a mode of communication until the early 20th century.

Each runic power represents both a letter and a power and these can be combined together to form words. It can be read from either right to left or left to right. Each letter is not written, but rather it is carved. hey were also used as magic symbols, and runic magic was used to fortune-telling, protection, spellcasting, and various other ways. Runes have been found carved on weapons, tools, jewelry, memorial stones and a variety of other surfaces, demonstrating its reach and power.