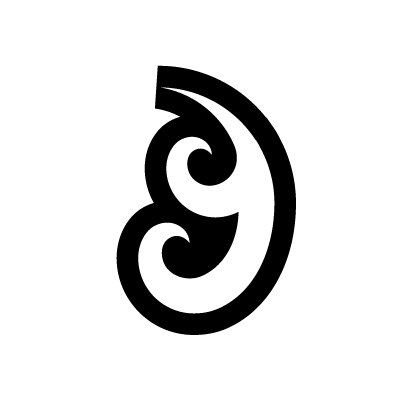 Moana means an open body of water – an ocean or sea. The term Moana, meaning ocean, is common to all Polynesian cultures. To the Māori, the sea was the source of all life, and the sea was relied on for sustenance, through fishing. The sea can be calm, energetic or dangerous at different times. These qualities are reflected in the meaning of the Moana symbol.

Māori symbols come from the Māori tribes of the South Pacific. The Māori are the indigenous Polynesian peoples of New Zealand. The Māori settled in New Zealand sometime in the 13th Century, likely arriving by boat from more northern Polynesian shores. Māori lived in distinct tribes, leading largely pacifistic lives built around canoeing, farming, fishing and hunting. As time passed and natural resources became less plentiful, the Māori developed weapons and a fierce warrior culture. They built forts and there were wars between opposing tribes. In the 18th and 19th centuries, Europeans began to settle in New Zealand. The settlers were mostly British and, as with elsewhere in the world, colonial rule was detrimental to the indigenous population. The Māori became a minority population in New Zealand. However, much of Māori culture, mythology and tradition have survived to the present day. Pre-colonial Māori had no written language, meaning knowledge and traditions were passed down through the generations orally or through art. Māori mythology conveys a deep connection with nature, as well as themes of creation and renewal. Another important element is whakapapa (genealogy) and reverence for ancestors, forming a significant part of the Māori tradition. Māori symbolism, including the famous haka, facial tattoos and wood carvings, as well as expressive iconography, provides insight into a rich culture, language and mythology. Māori symbols feature spirals, curves, natural images and supernatural deities. The koru, which represents the silver fern native to New Zealand, is a recurring motif in wood carving and larger artworks. Each symbols conveys meaning, and often relates to the relationship of man to nature, or to ancestry. Traditional Māori art and design form an important part of culture and identity, even today. Modern day New Zealand has embraced elements of Māori culture to represent a larger national identity. Air New Zealand uses the koru as its official logo, while the national rugby side, the All Blacks, perform a traditional Māori haka before matches. The hei tiki can be found carved on mugs in cocktail bars around the world.